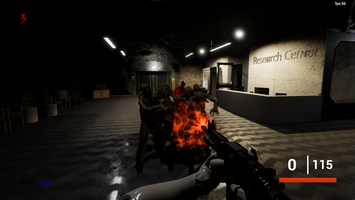 - Added 6 new weapons including a knife and a secret weapon:

-Players can equip the knife in hand to move faster, the players can also use the melee attack with any weapon equiped

-Probably added some new bugs too

-Fixed a few zones where you could go out of reach from zombie, hopefully there's none now ( no more hiding sorry )

-Fixed some "i can go through walls" bugs